Those who know my work know that I am a great admirer of the historian Lawrence Cremin whom I happily coopt not only as an anthropologist, but also as an anthropologist ahead of his time even as he channeled the Boasian tradition he was taught at Columbia while a graduate student.

This is the footnote:

Bailyn advances a definition of education as “the entire process by which culture transmits itself across the generations.” Yet, as Werner Jaeger made clear in the introduction to Paideia, until the word “culture” is clarified, such a definition remains obscure. “We are accustomed to use the word culture,” Jaeger noted, “not to describe the ideal which only the Hellenocentric world possesses, but in a much more trivial and general sense, to denote something inherent in every nation of the world, even the most primitive.” He was referring, of course, to the concept as developed by the social scientists-a usage he saw associated with “the positivist passion for reducing everything to the same terms.” By Bailyn’s definition, “education” is ultimately synonymous with “enculturation,” as that term is used by the anthropologists, notably Melville Herskovits. I myself am sympathetic to Jaeger’s insistence that true education implies the deliberate, self-conscious pursuit of certain intellectual, ethical, and aesthetic ideals, though I am perfectly ready to grant that nondeliberate influences are often, if not always, more powerful and pervasive and that the educational historian must be concerned with both. For a statement of a similar problem of definition that has long bedeviled literary historians, see Howard Mumford Jones, The Theory of American Literature (Ithaca, N.Y.: Cornell University Press, 1948), pp. 59-61 and passim. My reference to “the architecture of contemporary education” is taken from the lectures of my colleague Martin S. Dworkin in his course at Teachers College on “Education, Ideology, and Mass Communication.” (Cremin 1965: 75)

Note the attack on reductionism and enculturation; note “granting nondeliberate influences” as a kind of exception to “deliberate, self-conscious, pursuit” (aka, in my current vocabulary: practical meta-discursive work). 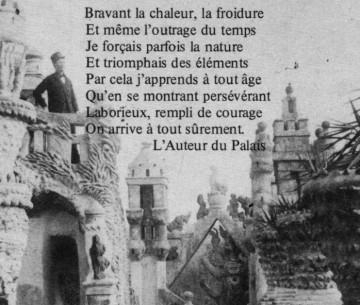 Note also Cremin approving of a metaphor not be taken as “constructivist” but rather as a prefiguration of Latour’s ANT: the ‘architecture’ of education.  I am not sure what Cremin would have done of my added comment that the building, as an assemblage of rooms and corridors assembled on the basis of competing blue-prints with much cracks papered over would look more like the buildings that delighted Lévi-Strauss ([1962] 1966: 17): Cheval’s villa, or Mr. Wilmmick’s suburban villa as imagined by Charles Dickens (who must have seen versions of it!). And, among many others, a Texas version… Not to mention, from the ridiculous to the sublime, the Sagrada Familia in Barcelona.