I had always been fascinated by what I read about Antonio Gaudi’s Basilica of the Sagrada Familia: a late 19th century Gothic church without flying buttresses! Culture! Structure! Transformation!

Finally, this summer, my wife and I were able actually to enter what Gaudi refers to as the “Expiatory Temple of the Holy Family.” As it approaches completion, it was recently dedicated by Pope Benedict XVI as a basilica, that is as a particularly sacred place for the Catholic Church.

I will leave aside for this current purpose the reality that the space is a powerful religious artifact, exactly as Gaudi intended.

I will just focus on the reality that, like all utterances, all acts, sequences, complex collective production, the basilica is a never-has-been-done-before. And it will never be done again, though it is also credited to have had much influence on later architecture.

“When” was uttered the statement that is the basilica is an interesting theoretical problem. Normal histories start with Gaudi taking over as main architect and re-designing what would have been a normal neo-gothic church. This happened in 1883 when the overall plans were drawn. What was proposed was immediately noticed as an innovation, a daring move many interpreted as a major mistake.

Gaudi also understood that translating the drawings into stone would require much education of those who might fund it, object to it, have authority over it, and so forth. In every way the building is a political, as well as architectural, artistic, or religious act. It, literally, speaks volumes. Over its unfolding, some have seen it as an insult to the developing intellectual ideologies of the 20th century and came close to demolishing it during the Spanish Civil War. Interestingly, they left the building standing but burned most of the plans.

Today, unfinished, the basilica’s “when” is still ongoing even as its interlocutors have morphed: one Pope dedicated it, others see it only as a tourist trap. I see it very much as a moment for education about much, including culture theory.

Now, as Michael Scroggins reminded me, elucidating how such statements as Gaudi’s (and the architects and artists working with his unfinished plans) arise in human history is the central goal of Boasian cultural anthropology. What a century of such anthropology should have established is that historical (archaeological) investigation can help trace the source of the shreds and patches used for putting together what is to happen next. But such investigations should never present themselves as “explaining,” “reducing,” or otherwise making the new unique disappear as, precisely, new and unique, the work of human hands and yet fully factual as a new object inscribed over the earth. 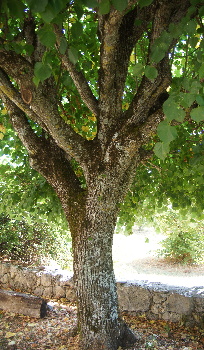 That which has never been said/done before, of course, always has a history, including a personal history about the “author,” whoever one decides to credit as such. We are told, for example, that Gaudi was sickly as a child, kept away from early schooling, and taken on walks by his mother where he became fascinated by trees, animals, plants. The fascination with trees led to the massive columns of the nave with their multiple branches. Later, Gaudi became fascinated by mathematical and geometric forms that are directly and explicitly translated into the building. By putting the two together, he found out how to angle trunks and branches so as to eschew the need for the flying buttresses that keep vaults from spreading out and collapsing in classic gothic churches.

Now, of course, the personal history of a speaker can never explain why personal or intellectual experiences would translate into this rather than that building. If …. and if …. and if … so many things had not also been the case, then Gaudi might have remained an obscure crank. Among the many “ifs” that might make a difference: such a provocatively Catholic building might not be allowed by the Catholic Church of the current Pope.

And yet, this personal history points at another fundamental process in the culturing of earlier life, what Lévi-Strauss wrote as the wild working of the human mind (my paraphrase). A tree, plant, animal, does not impose its own classification, and even less its classificatory scheme (Lévi-Strauss, [1962] 1963; Chapter V). Human beings name trees, animals, plants. And at least one of them taught many others, to this day and probably a long time to come, that trees are also marvels of architecture from which one can learn how to build transformed gothic.

Of course also, transformed gothic churches, as imagined, would not be inscribed on the earth if they were not fully respectful of what we now call the “affordances” of physics (gravity and mass), materials, technologies, social organization. It is interesting that one of the first completed building in the basilica compound is a school for the children of the workers who actually and physically build it. But affordances, like the trees that inspired Gaudi, do not name themselves. Translating noticed affordances into design and then literal construction is a task for human beings.

Actually, one of the most mysterious aspect of wild human thought is something that also fascinated Gaudi and is translated in all aspects of the Sagrada Familia: mathematics. The building is also a statement within a centuries long puzzled conversation about the mathematics of gothic arches. The Sagrada Familia is a specific play on platonic forms to which “nature” only hints (helicoids, hyperboloids, hyperbolic paraboloids,  etc.). As Piaget taught me ([1968] 1971), mathematics is a strictly human project that can develop unfettered by natural affordances. Piaget gives as an example equations from the 19th century that imagined a negative time. The equations were “elegant” … and were later proved useful in 20th century physics. Other elegant equations are similarly explicitly referenced throughout the Sagrada Familia, not only for their architectural necessity, but also for their esthetics, and religious, power.  Whether platonic forms are “discovered” or “made up” is an ontological question anthropologists need not answer as long as they remain clear that once noticed, they are, for possibly a very long time and large populations, fully factual.  Think about the history of ‘0’.

To paraphrase from my favorite quote from Lévi-Strauss on culture (1969 [1947]: 4), the Sagrada Familia stands as “a synthesis of a new order,” only possible because “culture … uses [nature].” I take this to say, of the Sagrada Familia to exemplifies, that reality is not constructed as much as it is uncovered and then possibly transformed. Human action in history cannot change the affordances of physics, materials, technologies, or probably not even social organization. But human action can use them to say/do something that has never been said before, and that will then become a succor or a reproach to this or that person, a confirmation of a stance, or a provocative insult.