Michael Scroggins, in one of drafts of the dissertation he will soon defend, brought out something I do not remember any anthropologist ever mentioned: we all easily use the distinction wild/domesticated.  But we do not write about the feral.

(I count on Scroggins to tell me more about his sources…).

Since he brought the ‘feral’ up, I have been playing with him on how to present something with which we now can make at least three distinctions:

We started, of course, with something most powerfully developed by Lévi-Strauss.  Famously Lévi-Strauss works through oppositions:

and, perhaps, nature/culture though this is not quite so evident since he repeatedly pointed out that we cannot possibly reach the “natural.”

What would he have done with the “feral”?

Now, it is not often noticed that, while Lévi-Strauss, starts with straw distinctions, he regularly moves to triangular models.  The most famous is a short paper about a “culinary triangle” that still has a small life inspiring scholars of human eating (D’Onofrio 2004: Chapter 5).  Like for his paper on Santa Claus (mushrooms, Totemism, etc.), Lévi-Strauss starts with references to contemporary life (Italians imposing crudités as edibles, America soldiers destroying Camembert as in-edible), then gallops through historical and geographical whirlwinds, and ends with the most general of statements: “Thus we can hope to discover for each specific case how the cooking of a society is a language in which it unconsciously translates its structure or else resigns itself, still unconsciously, to revealing its contradictions.” (2008 [1965]: 43).

I am not going to complain about the use of the “unconscious.”  One of these days, I may translate this statement into something I could now live with.  For today, I will leave this aside and concentrate on the preceding step: taking the mundane (eating and drinking) seriously.

In that vein, one of my fondest memories of my field work in Michigan was the meal when four glasses of drinkables were set for me (water, milk, wine, coffee), all at the same time, to be drunk in any order, as I saw fit.  On that day, I was also offered soup after dessert.  All my expectations about sequencing of foods and associations between food and drink were challenged, and I loved it: this is why I was glad for anthropology!  And so it became part of what I wrote about “America”: individualism, loving attention to individual whims when together, and the careful display of all this in words and actions.

Coming back to Lévi-Strauss and his “culinary triangle”: 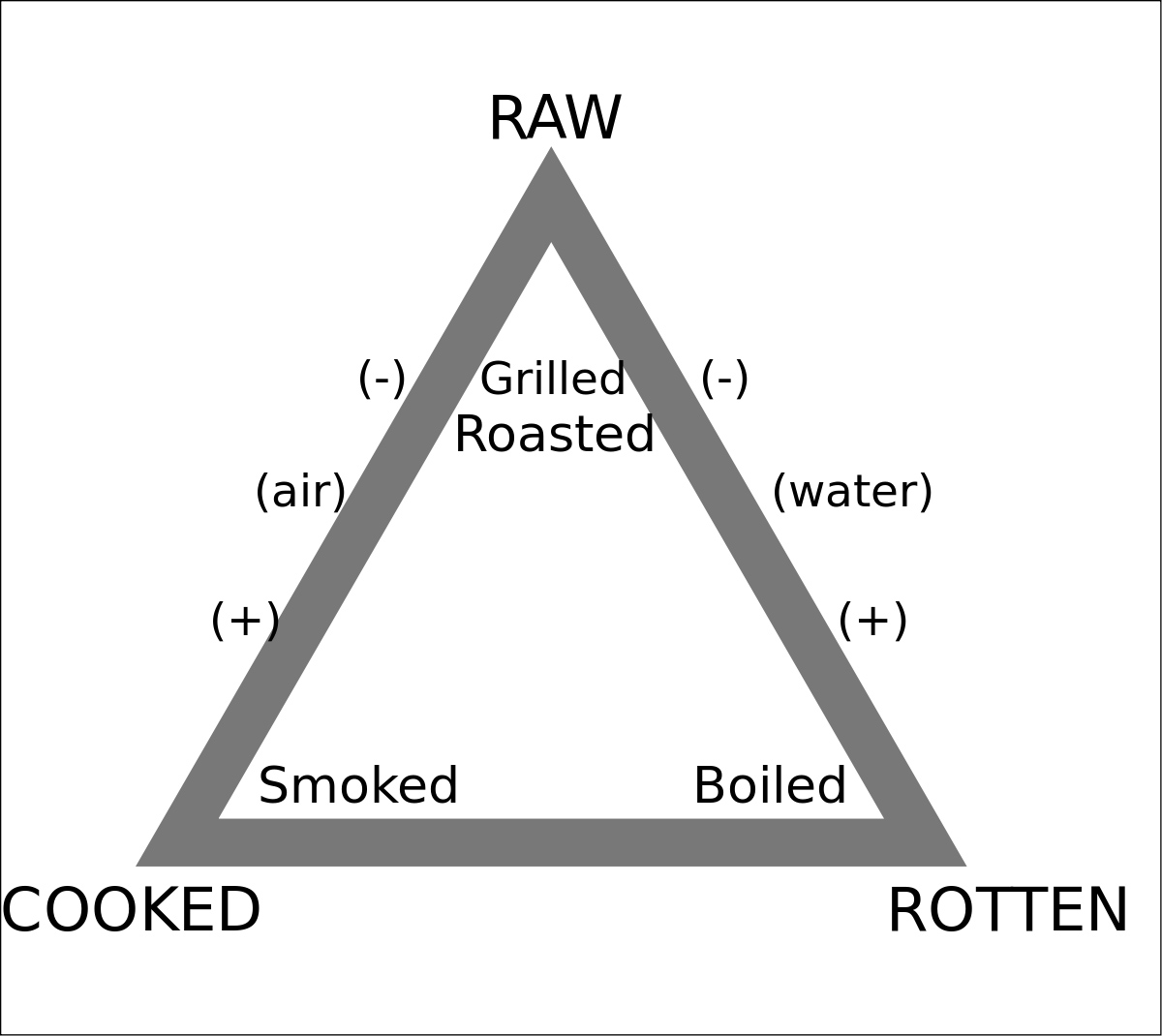 Let’s translate this into the world of animals (say cats in Australia), and transform the original triangle (as Boon did when modeling Balinese marriage into a strategic/sacred/romantic triangle  (1977)).

The error here, and Lévi-Strauss sometimes allows for it, would be to imagine the model as a collection of states of being (cats could ‘be’ either wild, or domesticated, or feral).  The model, as per Lévi-Strauss, is an analytic tool about, in this case, possibilities in any setting, at any time, when human beings get together to do anything (cooking, marrying, doing science).  Any statement (act) must be seen as “wild” AND “cultured” AND “feral.”  That is, what I am writing here is:

One open question, among many, concerns temporality, and I will write about it some other time.

2 thoughts on “Wondering about the feral”