One thing I discovered does not happen in Port-au-Prince: traffic paralysis. How can this be given the about total absence of the traffic flow signs, lights, etc.?  Without these, one is told in Europe and the United States, cars and people cannot move in dense cities.  But they can, in Port-au-Prince!

It’s certainly not the case the traffic (cars, motorbikes, pedestrians) is light.  Quite the contrary, it may be more dense, per street area, than anywhere I have been.  The streets around my hotel were narrow, with small sidewalks on which cars park.  The layout is mostly on a grid with many crossings, and only two or three traffic lights in the about 100 square blocks I got to know.  Driving, turning, walking, all involve constantly checking what everyone else is doing who might prevent you from continuing (if not hit you).  To add to the challenge matters are major pot-holes, missing sewer grates, piles of gravel, etc.

So what do people do at major intersections when several avenue intersect with none of the external help one might expect?

They proceed — with care I am sure !  Even a New Yorker like myself can remain intimidated.  I guess the “rules” are simple: it can be done, there are gaps between cars and motorcycles, do not hesitate or change your mind, others will interpret a movement and act accordingly (people will zip behind you if it appears clear that you are moving; they will zip in front of you in the space you have not yet reached–unless of course something is coming in the other direction to which you should also pay attention).

Check the man on the photo. Everyone is moving. Note how he strides confidently towards the space that will soon be freed by the passing car. “Knowing the rules” will not help him.  There is no time to plan when everything is moving fast.  You have to keep crossing streets that are not quite the same at the middle of your crossing as they were at the beginning.  And yet, several million times a day, people in Port-au-Prince do it!  After several hours of walking and being driven around, I did not see an accident.  They must happen, and there is probably statistics showing that the rate of injury is higher here than elsewhere (at least I hypothesize it may be).  But modern life with cars, motorcycles, large number of pedestrians in narrow streets proceed in an altogether orderly manner.

Of course, those who read this blog should know where I am going: the next time I teach Garfinkel on driving in California, I will talk about doing it in Port-au-Prince: that is the challenge for sociology.  How do people do what they can be seen as doing in difficult, scary, life-threatening situations: they check around for what others are doing, and they do it!  At times, they even stop and wave one across!

Those who follow this post will not be surprised by the preceding paragraph.  But, mostly, when teaching Garfinkel, I leave aside “bioanthropology” (the new moniker for “Biological Anthropology”?) and sociobiology, as well as, more problematically, cultural anthropology.

So what would a sociobiologist say about crossing the street in Port-au-Prince? The urge to survive?  The need to take risks to survive?  What would our selfish genes say?

More interesting are the less theoretical sociologists and social anthropologists who might want to write about the economics (neo-liberalism?) or politics (neo-colonialism? failed state? misguided NGOs?) responsible for the absence of traffic lights at the very ceremonial center of Port-au-Prince.  True enough.  But is this the end?

Is there any place for a cultural analysis?  To the extent that the ensemble of the proximate “causes” for the conditions that make this kind of traffic pattern what individuals must struggle with now, are unique and may not last long (I saw a few newly installed traffic signals in the say 100 traffic corners I experienced), then the situation is “cultural” (historical, a matter of partial diffusion, borrowing, and refusal to borrow).  But I would like more: is the traffic pattern also “arbitrary” in the sense that it is not a product of functional adaptation, but also of some kind of collective imagination?   Are traffic lights necessary? Or are they the product of an evolutionary conceit about orderliness, separation of functions, etc.?

To answer such question, one could check what is happening in Holland.  Traffic lights can disappear. 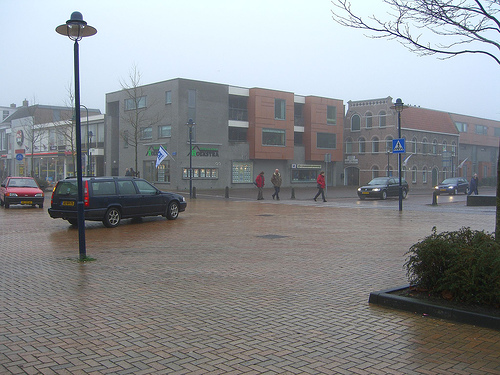 And so, it seems that trafficking is not only a matter of instruction into not getting killed here and now.  It is also a matter of complex deliberations…

Haiti may be ahead!