“Pattern recognition”: inevitable though fragile (and necessarily dis-…ing?) productions on which to base some future action—or not.

Two recent pieces in the New York Times triggered my anthropological imagination. The first is an enthusiastic review of recent developments in “Artificial Intelligence” (“We Need to Talk About How Good A.I. Is Getting,” Kevin Roose, Aug. 24, 2022). Would you believe that you can ask, in text, for a “Black-and-white vintage photograph of a 1920s mobster taking a selfie” and you get an image that makes sense, to an aging professor and apparently many others in 2022? Roose’s piece mentions in passing that AI generated representations could be politically problematic. They have already been. A day earlier, another piece had been published that gives a sense of what can happen next when AI is let loose. That piece was titled “Capitol Drops ‘Virtual Rapper’ FN Meka After Backlash Over Stereotypes.” The piece was about “a virtual ‘robot rapper’ powered partly by artificial intelligence, who boasts more than 10 million followers on TikTok” (Joe Coscarelli, Aug. 23, 2022). As some critics wrote the robot rapper is built on “an amalgamation of gross stereotypes, appropriative mannerisms that derive from Black artists, complete with slurs infused in lyrics.”

In other words the critics recognized the image as that of a Black rapper and thereby accredited that the AI algorithms had indeed caught what in other AI contexts is called a “pattern.” This recognition confirms Roose’s evaluation about “how good A.I. is getting.” Whether this pattern should be used to produce something (not so) new is another thing altogether.

For this aging anthropologist, it all made me nostalgic for the moments, many years ago, when I first read Patterns of culture (Benedict 1934). I was caught in the wonder of what populations of humans beings could make with their world.  This wonder soon established that I would try my hand at patterning the life of people in “downstate Illinois.” I also read some critics of what one might imagine the Zuni or Kwakiutl to have experienced when Benedict was with them (An-Che 1937; Codere 1956). The critics, and many others since, prefigured the debate about patterning a rapper: one might be successful at sketching a pattern, but the pattern can, and maybe always will, caricature. The sketch will overstress certain matters, mask much, and so might mislead audiences. The critique made so much sense as it was generalized in the anthropology that then developed that the word “pattern” all but disappeared, as well as the word that, for a while, replaced it: “structure.”  In 1972 Geertz could still write, quoting Bateson and Mead, of the Balinese as “away” (1972: 413)—a pattern statement. But his concern was with “interpretation” not pattern.  Soon most of those he inspired focused on local experiences, and then on local struggles with whatever powers the people have to deal with. That these struggles might be patterned (that is that a pattern might be sketched), and that the patterning, including by the people involved, all but stopped being something to investigate—though this could change if anthropologists come to wonder how to investigate “systemic” matters (about race, gender, ideology, etc.).

Actually the word “pattern” is already essential in the enormously influential field involved in “pattern recognition.” The field is not quite new as it has been more than 30 years since David Cope started training a computer to recognize patterns in the music of Mozart or Bach so that it could produce new works that untrained listeners might identify as precisely by Mozart or Bach. What is going on here is, I believe, something anthropologists should keep returning to. 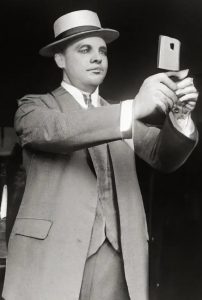 To escape the politics of the moment look at the picture of the mobster taking a selfie. Why would it be that the designers, and the journalists, and me (and probably many others) recognize it as just what was requested: a 1920 mobster? Maybe it is because it looks a little bit like Al Capone. Mobsters have of course been virtually virtually represented in similar ways in many movies of the past century. As I understand the AI process, machines watch movies (and representations in other media) and build patterns from these.  The machines conduct what was known as a “formal analysis” (Propp [1927] 1968) that is checked for its success, not on its coherence, but on its ability to produce a text (musical piece, picture) that humans can accept common sensically as just that they asked (a folk tale, a symphony, the picture of a mobster). But of course, human beings do similar tasks on a routine basis. Compare the person asking DALL-E 2 to produce a 1920 mobster to the teacher who asked students to come the next day “dressed as your ethnic identity.” 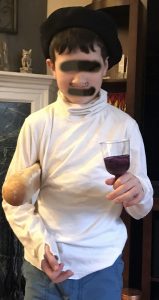 The virtual computer (mother, grandfather, and child) produced this picture of a French man. It satisfied the requirement as the product was recognized as an instance of “French.” Besides recognition this product elicited laughter (and some discomfort). Virtual virtual musicians (i.e. live human beings) do this routinely and, if asked to play a song, say “Happy Brithday,” in the style of Beethoven, Mozart or Bach, they can produce something which will elicit a laughter of recognition and applause—as Nicole Pesce or Nahre Sol can illustrate. Indeed DALL-E 2 performances are also fun for the humans who attempt to make sense out of its non-sense.

Let’s go back to Benedict. As far as I can tell Benedict proceeded like its programmers make DALL-E 2 do: she read many Zuni (Kwakiutl, Japanese) myths, descriptions of rituals, accounts of institutions, and, on this basis, built a representation that those who knew the people somehow recognized as Zuni (Kwakiutl, Japanese), even if they disagreed about some detail or about the dangers of representation. But the problem is more general since it must concern the very status one gives to the “pattern,” its production and reproduction. At this point I usually mention the famous (in my generation) debate between Radcliffe-Brown and Lévi-Strauss on what we might now call the “ontology” of (social) structures. But one should also check Lévi-Strauss’s discussion of Propp (1960) in the context of Latour’s Garfinkelian new explorations of that which make “immortal facts” (patterns that will die as the participants disperse). Closer to home, check Koyama’s critique (2010) of Varenne and McDermott on “the School America builds” (1998).

There is much here to inspire apprentice (virtual virtual) anthropologists to explore new routes to represent perennial issues.